What is Vapor Degreasing?

Vapor degreasing is the cleaning process by condensing solvents vapors on the object that is being cleaned. The process doesn’t require any water or scrubbing. Instead, the machine, a vapor degreaser, uses solvent vapors to cleanse and remove contaminants off of parts. The process is used to clean various materials during manufacturing such as plastic, glass, metal, gold, and ceramic.

How does Vapor Degreasing work?

At its most basic configuration, a vapor degreaser contains two tanks that are called sumps, a metal basket, and bands of cooling coils. One sump boils the solvent (boil sump) and the second sump (rinse sump) collects the solvent distillate. You can take a look at our selection of vapor degreasing solvents here.
As a secondary cleaning method, the parts may be dipped into the boil sump, and ultrasonic added for additional agitation. 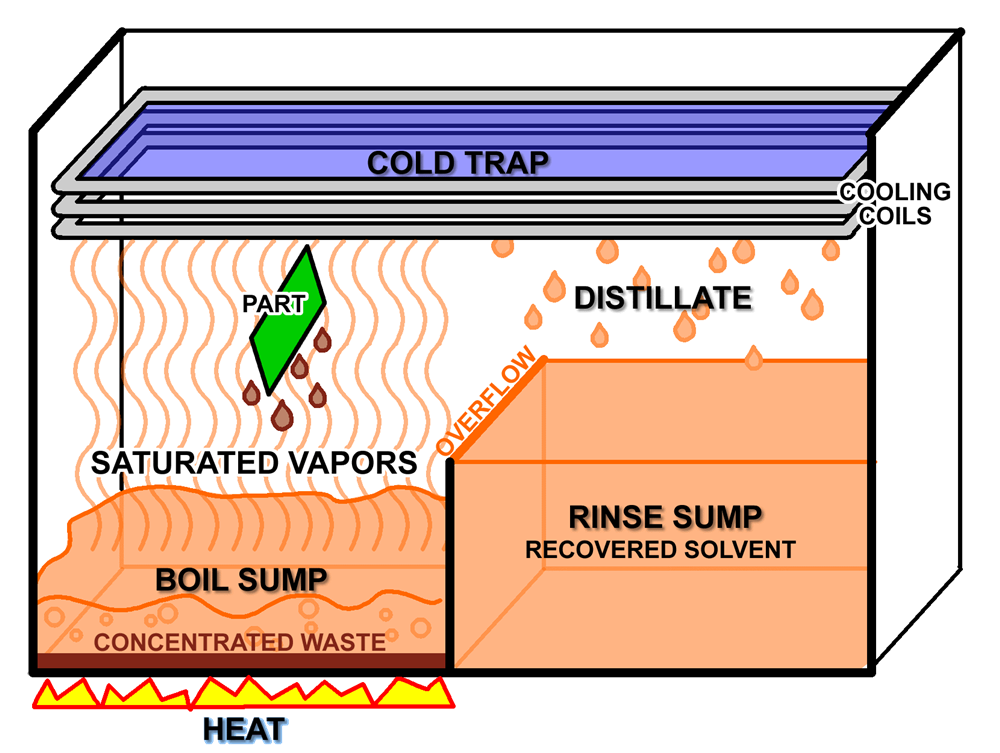 The parts that will be cleaned are placed in a metal basket that is lowered within the machine. The basket remains above the boiling solvent and below the cooling coils. The vapor degreaser boils the solvent. The solvent vapors rise but don’t escape because they’re trapped within the machine by a layer of refrigeration via cooling coils.
The vapor then condenses on the surface of the parts dissolving the contaminants. As the solvent drips off the objects it removes the soils with it.  This is a closed-loop process, so the solvent is cycled over-
and-over again. The vapors go up into the cold trap, condense and run back down into the rinse sump. The rinse sump then overflows into the boil sump. The soil stays in the boil sump and will not travel with the vapor, and will not cross-contaminate parts or the rinse sump.
Those who wear glasses will find this process familiar. It happens when someone leaves a hot room or outside, and then enters a cool room. The warmer, more humid air outside will condense as a fog on your colder glasses. Once you step back inside to the dryer air, and your glasses will clear. This is essentially the same process as the term “reflux method” -warm vapors condense back into liquid when cooled.

In Which Applications and Industries Are Vapor Degreasing Used?

Almost any industry in which precision cleaning is paramount to the manufactured parts, vapor degreasing can be found. It is common in automotive, aviation and aerospace, medical device manufacturing, jewelry manufacturing, and electronic assembly.
Various methods have been developed along the way including vapor only cleaning, vapor-spray-vapor, liquid-vapor, boiling liquid-warm liquid-vapor, spray-under-immersion, vacuum degreasing as well as ultrasonic cleaning in conjunction with almost any of these.

What Are the Benefits of Vapor Degreasing?

The clear benefit of vapor degreasing is the superior cleaning that it delivers and it is a very repeatable process, not as dependent on operator technique and manual cleaning methods. The use of vaporized solvent avoids cross-contamination, which is a problem with cleaning methods that reuse solvents or cleaning solutions from part-to-part. The use of solvents enables that objects dry quickly without a secondary drying process.
Although vapor degreaser solvents are generally expensive compared to other cleaning materials, they are continuously recycled in the closed-loop process, which can make it an economic method of cleaning. In addition, compared to batch or inline systems common with aqueous cleaners, vapor degreasing doesn’t require heating water, rinsing, drying parts, or treating wastewater during post cleaning.

How to Select the Best Vapor Degreasing Solvent?

With the exception of co-solvent or binary solvent degreasing, it’s important that a vapor degreaser solvent is as close to an azeotrope as possible, which means all the solvent constituents boil at around the same temperature. This ensures the formulation does not change as the solvent is vaporized and reconstituted hundreds of times in the closed-loop cycle.
An azeotrope (as used in the cleaning world), is a mixture of two or more liquids, whose chemistries are exactly the same in both vapor and liquid phases. There are properties of any azeotrope that are unique. For example, a binary solvent blend contains two solvents, each with its own boiling point. Combining these two in a precise manner, the resulting product exhibits a boiling point different than either of the individual components and maintains that boiling point throughout the process. It acts as a single component product.
Near-azeotropes, on the other hand, will fractionate (split) the two ingredients to a small degree as they boil. Although stable once equalized, the composition of the vapor and liquid phases are not exactly the same. One phase will be skewed greater with one component while the other phase will be greater in the second component. Due to this, there may be small differences in cleaning performance between the liquid and vapor phases.
Now that you understand the terms, let’s look at the comparative advantages of an azeotrope versus azeotrope-like in vapor degreasing. In a near-azeotrope system, you will probably get slightly better performance with soil in one phase or the other. This could be beneficial in the vapor phase if you are restricted from using immersion due to the sensitivity of components, materials, etc.
When using a near-azeotrope solvent over a longer period of time, solvent losses from either vapor escaping the cool zone or drag-out, the relative concentrations will shift. Depending on the composition of the solvent blend, the operating condition of the equipment, and the amount of time, the change in the component ratios may produce an unsafe operating condition, or at the very least, impede cleaning performance. For example, one component of the solvent mixture may quench the flammability of the other, so a change in the component ratio could increase the likelihood of the vapors igniting.
Selecting and qualifying a vapor degreaser solvent is in itself an involved topic that we will cover in later papers. In short, you will need to identify a solvent that cleans your particular soil well, does not damage your parts if they are sensitive to solvent exposure, falls within your local environmental guidelines, and at the lowest possible toxicity. Many companies are actively replacing n-propyl bromide (nPB) and Trichloroethylene (TCE) based solvents because of the high toxicity and risk factors, like cancer.

What is the Best Location for a Vapor Degreaser?

When purchasing a new (or an additional) vapor degreaser machine, the location of the unit should be considered thoroughly to find the optimal positioning of the equipment.  Following are some areas of concern to keep in mind.

What are the Key Operational Checks When Setting Up A New Vapor Degreaser?

How Do You Optimize a Vapor Degreaser Process?

Before you perform the optimizing process, it is important to note the following:

As our example, we will use a basic PCB to be defluxed with no sensitive component restrictions. However, also assume the customer has specified that there will be no immersions, i.e. vapor zone cleaning, but spray wand usage is OK.

Hopefully, your chemical manufacturer has performed cleaning trials on these test boards and has provided you with a general guideline for vapor zone cleaning only. Use these settings as a starting point. If this has not occurred, you will need to start from scratch.

Since there was no restriction on wand usage, now test this along with the times recorded for vapor zone cycles.

The idea behind this simple example is to increase cleaning performance in a timely manner to increase throughput, decrease solvent loss, and operate the unit in an efficient manner.

For each cleaning option/variable you try, if the option does not add in the cleaning performance or in reduced time, discard it. At each stage of the experiment, go back and re-verify each until you are convinced that the process is operating flawlessly and with maximum performance.

Obviously, you can see that if you have multiple parts and soils, this can take a long period of time to set up your cleaning programs or schedules. However, once done, your operators will have a clear step-by-step recipe for the variations in parts and soils. Each time a new one is added, the validation process must be repeated and an addendum made to the program to follow.

Essentially, any time the upstream process changes, the “cleaning department” should verify what, if any, changes should be made to account for this. This will give your process team members confidence that the cleaning method was validated by a strict set of rules and the most efficient method was chosen to meet customer performance standards as well as utilizing production time wisely. It is well worth the time spent in optimizing and recording the process. Your customers and team members will appreciate the results.

Techspray has a large variety of solvents intended for vapor degreasing under the brand names PWR-4™ and Precision-V™. These products are engineered to be less toxic than many other solvents commonly used in vapor-degreasers: e.g. TCE (Trichloroethylene, CAS #79-01-6), nPB (n-Propyl Bromide, CAS #106-94-5), and Perc (Perchloroethylene, CAS #127-18-4).

These are just a few areas of consideration.  Please consult the equipment manufacturer, your engineering staff, and consider local environmental and safety regulations to ensure your unit is placed in the most optimal location.If you have any questions that we didn't cover here be sure to post them below. We'll make sure to answer them and add them to future updates in this post. And if you would like to speak with a specialist from Techspray about vapor degreasing contact us today.

Techspray has technical resources to help you evaluate and set-up your vapor degreaser machine. Contact us or give us a call at +31 088 130 7400.

You did not finish submitting your information to request a sample