Aircrafts flying in desert environments get dirty. Really dirty. It is also the most demanding environment in the world, with blowing grit and filth being a mainstay of everyday life. This is especially troublesome with modern aircraft that are heavily reliant on electronics for sustained flight, namely drones.

Drones are especially sensitive due to their complete reliance on electronics and sensors, as well as being subject to the same filth and grime as their manned counterparts. Let’s take a look at what is being done to keep these aircraft clean in the area of operational responsibility (AOR), and at their home station.

Over the past couple of decades, military drone use has grown by a large margin. At present, the U.S. military maintains an inventory of over 7,000 unmanned aerial vehicles (UAV) or unmanned aerial systems (UAS) which are broken down into two distinct categories: small systems and large systems.

There’s been enormous amounts of regulatory noise and action in recent years within the FAA for what is identified as 14 CFR Part 107, but is most generally referred to as “Part 107”. This regulatory code encompasses small UAS (sUAS) systems, which are units that weigh under 55 pounds. These are commercially available off-the-shelf units frequently used for amateur and professional videography, namely the DJI line of products.[1]

Large UAS however are defined very broadly as anything over 55 pounds. The RQ-4B has a maximum gross takeoff weight of 32,250 lbs. which represents a reasonably extensive range!

The military is often the flag-bearer for technology that will eventually trickle down to widespread civilian use, and drones are no exception. They have been using large UASs for over two decades, with original systems coming online in the ‘90s. Operations Iraqi Freedom and Enduring Freedom were the perfect opportunities to showcase the usefulness and capabilities of the UAS community. However, Iraq and Afghanistan contain some of the harshest environments in the world, inhospitable to both man and machine.

WHAT ARE THE EFFECTS OF HARSH OPERATING ENVIRONMENTS ON UNMANNED AERIAL SYSTEMS (UAS)?

The large drones operated by the military stayed in theatre for long durations. It was far more practical to perform heavy maintenance in-country rather than flying them out since they have a fairly small inventory, and there are significant added logistics in the movement of drones since they have to be carried out in cargo aircraft The result was aircraft spending significant periods subjected to sand and extreme heat.

A desert is one of the harshest environments for aircraft operations in the entire world. The deserts in Afghanistan and Iraq are problematic for two main reasons:

The desert is a harsh and demanding enough environment that the U.S. Army devotes an entire section to it in the Field Manual 3-04, Army Aviation. They acknowledge the value of UAS capabilities succinctly by stating, “The extended sensor, communications, and weapons ranges of attack and reconnaissance RW and UAS enable long-range engagement of targets and collection of combat information to confirm or deny the commander’s PIR at the extended visual ranges typically associated” with desert environments.[2]

The U.S. Army also confirms the tough reality of desert operations by specifying, “High temperatures, along with dust and sand, increase maintenance requirements. For example, the expansion and contraction of seals during extreme temperature swings increase the frequency of leaks and electronic component failures. In addition, abrasion on rotor blades and other dynamic surfaces requires more frequent cleaning and can reduce component life, especially blades, bearing assemblies, and engines.”[3]

WHAT TECHSPRAY DOES TO COMBAT DESERT GRIME ON DRONES

Techspray has engineered a line of cleaning products explicitly tailored to the aviation maintenance community. In addition, we work in concert with aircraft manufacturers and MRO facilities to ensure the products we deliver are products they want and need.

Drones pose a unique set of challenges for MRO due to their unparalleled complexity since they are entirely reliant on sensor packages for sustained flight. In addition, dirt and dust wreak havoc on avionics suites, particularly connectors.

Avionics cleanliness is paramount to safe and reliable drone operations, particularly short-term/immediate reliability. A corroded connector caked in oil and dirt can cause immediate problems.

Connectors on drones are a weak link. Cannon plugs are durable and perform well, but they are not impervious to the elements. Techspray’s E-Line Contact Cleaner can be used to flush out contaminants and ensure your connections remain uninterrupted. It removes oils, oxidization, and other assorted contaminants from your drone’s plugs and connectors, as well as protecting contacts, metal switches, motor relays, generators, edge connectors, buss bars, circuit breakers, scales, and sensors.

In contrast to avionics cleaning, which addresses immediate issues, structural cleanliness is more of a long game. Ignoring it seems insignificant for a day, but days become weeks, weeks-months, and ultimately months become years of neglect.

No matter how you cut it, your drone is going to be oily and greasy, mainly coming out of the AOR where the high heat expands seals while temps swinging to cold (especially at altitude) cause them to retract. Your drones have been working hard, and they will wear the scars from experience in the form of drips and smears.

Corrosion is your #1 structural enemy and is lethal to all metals commonly used in aircraft construction. The FAA lays out the corrosive process and the preventative maintenance steps in Advisory Circular 43-4B, and one of the most corroded areas is the exhaust trail area.

The soot will cling to the skin and work its way into rivet heads, as well as seams in the skin and just about anything else in its path. Techspray PWR-4 Aviation Degreaser can solve that problem by powerfully blasting soot and dirt, grease, carbonized oils, and even Skydrol from your engine housings and exhaust trails. PWR-4 Aviation Degreaser spray features a powerful, long-reaching spray to clean hard-to-reach parts from as far as 10 feet. It is fast evaporating, quick penetrating, and ideal for cleaning aviation parts

Drones have become a powerful tool in the global war on terror, proving their worth repeatedly. They have also come home, now being used in almost every industry imaginable. Large UASs, namely those relied on by the DoD, are susceptible to the same stresses of manned aircraft, particularly in desert operations where extreme temps, blowing sand, and high operational tempos wreak absolute havoc on equipment.

Techspray has the solutions to keep your drones clean and free from corrosion-causing materials, whether in the avionics or in structural components. For more information, contact your Techspray application specialist at techspray@itw-cc.com. 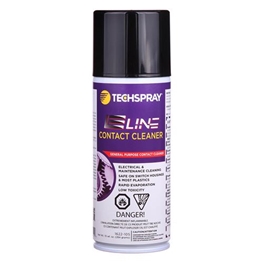