Desoldering wick (also known as solder wick, wick, or desoldering braid) is a common method of removing unwanted solder using flux and braided copper wire.  It is commonly used to aid in removing faulty components, to correct solder bridging, or for any other reason that solder needs to be removed.

Wick is used by everyone from massive printed circuit board factories all the way to beginning hobbyists.

Wick is relatively inexpensive and simple to use compared to other methods of solder removal.  It is also safer on components than vacuum desoldering devices, as less heat is applied to the component and the heat is applied for a shorter period of time.

Techspray is one of the most commonly used brands of desoldering wick in the world.

Step one:  Choose the appropriate size of wick and soldering tip for the solder to be removed.

Choose a width of wick that is similar in size to the glob of solder to be removed.  Using wick with a significantly different width will make the solder removal more difficult.  It is usually beneficial to keep several different widths at your work station in order to be ready to desolder anything that you may encounter.

Additionally, choose a tip for your soldering iron that is reasonably close in size to the wick that you are using.

Next: You will need to choose a wick with the appropriate flux type.

HOW TO REMOVE SOLDER WITH DESOLDERING WICK

Step One:  place the wick over the solder to be removed and then place the hot soldering iron over the braid.

Step Two:  Place the tip at an angle that maximizes heat transfer through the braid to the solder.  Use a clean tip that you have just tinned with fresh solder to maximize heat transfer.  Heat will be moving up the copper, so be careful not to burn yourself.

Step Three:  Apply slight pressure and wait for the solder to melt.  Don’t get in too big of a hurry at this point.  Allow the tip to dwell long enough on the wick to heat the wick and then the solder on the other side.  You will see the wick begin to absorb the solder.  Hold the tip and wick in place until the wicking action has stopped.

Step Four:  Remove the wick and braid at the same time.  Removing the iron before removing the wick can cause the wick to become soldered to the board.  If that does happen, reheat the braid so that you can remove it.

Tip:  Adding a little extra flux to the joint before applying heat can make the job even easier and faster.  This will also help to make an older spool of wick work like new.

Once the wick is saturated with solder, trim it off and move to a new piece of the wick for your next desoldering.

How to Remove Small Amounts of Solder with Desoldering Wick

Sometimes there is a small amount of solder that is difficult to melt.  This happens occasionally when solder is left in a through hole after removing the lead—Applying heat long enough to get down into the hole and melt the solder could damage the board.

Instead, add a good amount of solder back to the area.

Then put the wick over the new solder, and remove it in the same way previously described.   The additional solder acts as a heat bridge to the tiny amount of solder that was hard to reach…so it is all absorbed at one time.

Next, I will demonstrate removing solder from around a lead.

We go through the same steps, but put the wick up against one side of the lead, place the solder tip over the wick and the solder will pull from all the way around the lead.  This can be a good time to add more solder to the joint if not all of the solder is wicked up.

How to Remove Solder from BGA Pads

Step three:  Lay the braid all the way across the solder to be removed.

Step Four:  place the tip on one end of the braid.  Move the tip slowly along the braid to melt and wick solder as you move.  Lift the wick as you move so that the braid doesn’t adhere to the board.

For more information, please go to www.techsprayeu.com or e-mail us at techspray@itw-cc.com. 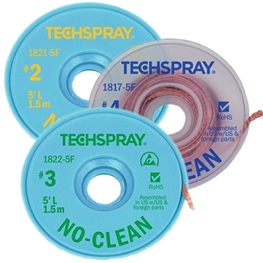 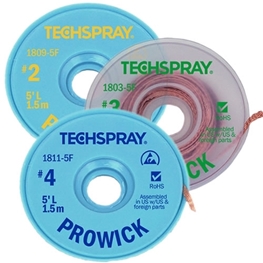